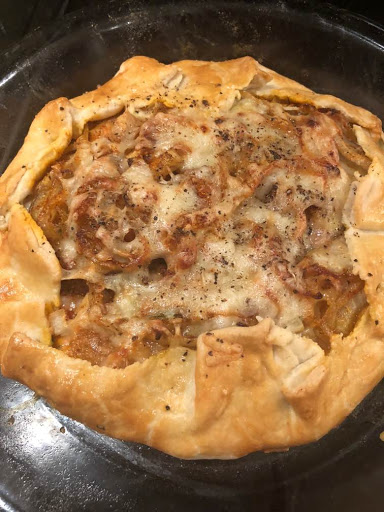 Ok, I’m going to tell you right now that making pie crust isn’t hard. It really isn’t!! Just a little time consuming since you have to make sure it’s cold and refrigerate a few times. Which you need so that when you bake it the butter melting it leaves pockets in the dough, which will give you a nice flaky crust rather than a dense slab of slate.

I love this Science of Pie article since they go into the “Why’s” and “How” of pie crust. Just in case you want to nerd out a bit. 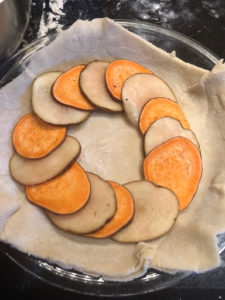 What I love about pie crust is that it’s so versatile! Sweet. Savory. Big pie. Small pie. Life of Pi… you name it and you can pie it!

In this instance, I decided to go with the lesser known “pie” form of a galette. It’s an open pie filled with whatever your little hearts desire, then pleat the edges around the filling. I love this because it looks more rustic and homemade. Although I would definitely consider this a more Fall recipe, but it looked so good that I couldn’t resist! 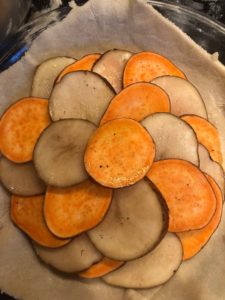 The mixture of the savory from the rosemary and cheese are complimented by the sweetness of the caramelized onions and sweet potatoes. Not to mention that the embrace of buttery pie crust makes this so picturesque! Looky at that loveliness! 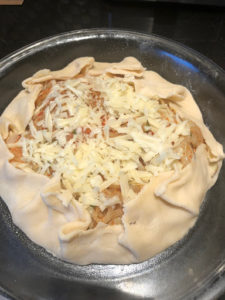 The gruyère is a great cheese for this galette because of its light-nutty flavor. It compliments the spices and potatoes rather than overwhelm it. Freshly grated loveliness! 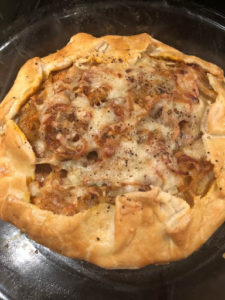 Why does good food take so long to cool??? I want to eat this immediately, but also want to preserve my taste buds for future yumminess. WHY IS MY LIFE SO HARD?

Add a side salad to make it healthy… I swear it’ll work! One of my favorite side salads is so simple I almost feel bad. It’s arugula with a basil vinaigrette and a touch of balsamic glaze from Trader Joe’s. The flavor adds a nice fresh and peppery aspect to the more hearty dishes. And you get your veggies in for the day! Double whamy! 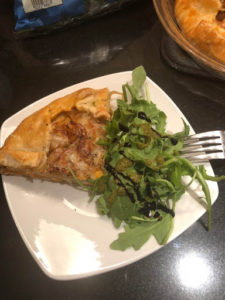 Yield: Makes about 2 small galettes or one big one 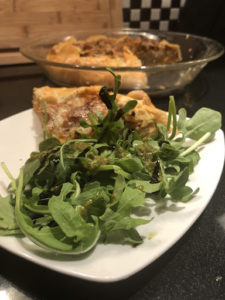